Riding Out of Your Comfort Zone 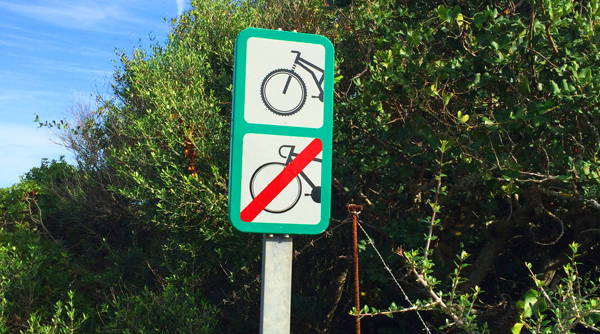 Mountain biking around the coast of sunny Menorca with a group of girl friends. What could possibly go wrong?

When we booked our Menorca trip we knew we were in for some technical riding – the Cami de Cavalls trail follows the rocky coastline gulleys and beaches so closely that you’re often almost riding in the sea.

Add awesome views, sunshine, beach bars, a deal that afforded us the luxury of staying in 4* hotels, lots of wine - and the chance to challenge ourselves when things inevitably failed to go to plan – and the result is both fun packed and rewarding.

None of us had ever used a Garmin before – and consequently a couple of the group had absolutely no faith in its powers.

We’d chosen to ride unaccompanied over four days, so our tour company sat us down for a long, detailed briefing before we set off. We listened carefully as areas to avoid (‘too technical’) and alternative routes were explained, tried to remember what to do when we reached ‘the gate that is locked but has a hole in the wall next to it’ as opposed to the ‘the gate with steps that is open’ or ‘the gate that the farmer may have locked’ (there were a lot of gates).

The trail had frequent marker posts, we had a map, and we had a Garmin preloaded with the route. But despite our best efforts, we knew we would not be able to control everything.

For a start, none of us had ever used a Garmin before – and consequently a couple of the group had absolutely no faith in its powers. Thus when it sent us away from the original trail we’d grind to a halt for an ‘are you sure?’ debate.

Every time something went wrong, something good inevitably happened to put it right again.

Meanwhile, checking a map requires stopping, removing map from back pocket, unfolding map, turning map the right way up…then realizing that at least one of us is ‘wearing the wrong glasses’ and cant see it anyway.

But every time something went wrong, something good inevitably happened to put it right again. For instance, we were fairly confident that we could manage mechanical difficulties - but a slashed tubeless tyre half way up a remote, wind swept trail eventually got the better of us - and we had no mobile reception to summon help.

Two of us went ahead to see if we could spot any signs of civilisation, and were duly rewarded by the sight of the only restaurant on that section of coastline. What’s more it was open, and the proprietor turned out to be a mountain biker. He took one look at the tyre, fetched his phone and summoned a replacement wheel from the tour company on our behalf.

Meanwhile we scoffed plates of sea food and picked up some expert local knowledge on where we riding next: “Its steep – but its not technical. You’ll be fine!” Local knowledge – it’s a wonderful thing.

What else did we learn?

Serrano ham and melon is a zillion times more appetizing than an energy bar, and seemingly just as effective. Friends don’t mind seeing you at your exhausted, grumpy worst – especially if you smile and do the group hug thing five minutes later. There is no need to worry that someone will want to steal your sweaty cycling shorts while you are skinny dipping in the sea.

And a mountain bike holiday isn’t complete without bruises, laughter, and wine: and we had lots of all three.

Inspired to try out mountain biking?