It had been a long old winter.

It felt like it had been a long old winter anyway; cycling to and from work in the dark, lights flashing from all possible angles to warn passing cars (and the occasional deer) that I’m there.

Wondering whether a tailwind actually exists and experiencing a hailstorm in a headwind. Bearing an alarming resemblance to the Michelin Man as I waddled into work, every single layer of clothing I own wrapped around me in a futile attempt to retain body-heat.

And then finally, after months of darkness, then sun came out!

There’s something magical about the century, the achievement of ticking over from tens of miles to the elusive three figures

Like bees to honey, cyclists filled the roads and lanes of the Severn Valley; young and old, on high-end race bikes, rusty flat-tired mountain bikes and even the odd tandem. Groups of men, groups of women, club runs, chain-gangs, coffee and cake rides; all those dark winter months of riding were over.

With the countryside bursting with life, it seemed like the perfect opportunity to plan some adventures and first on my list was a century ride. 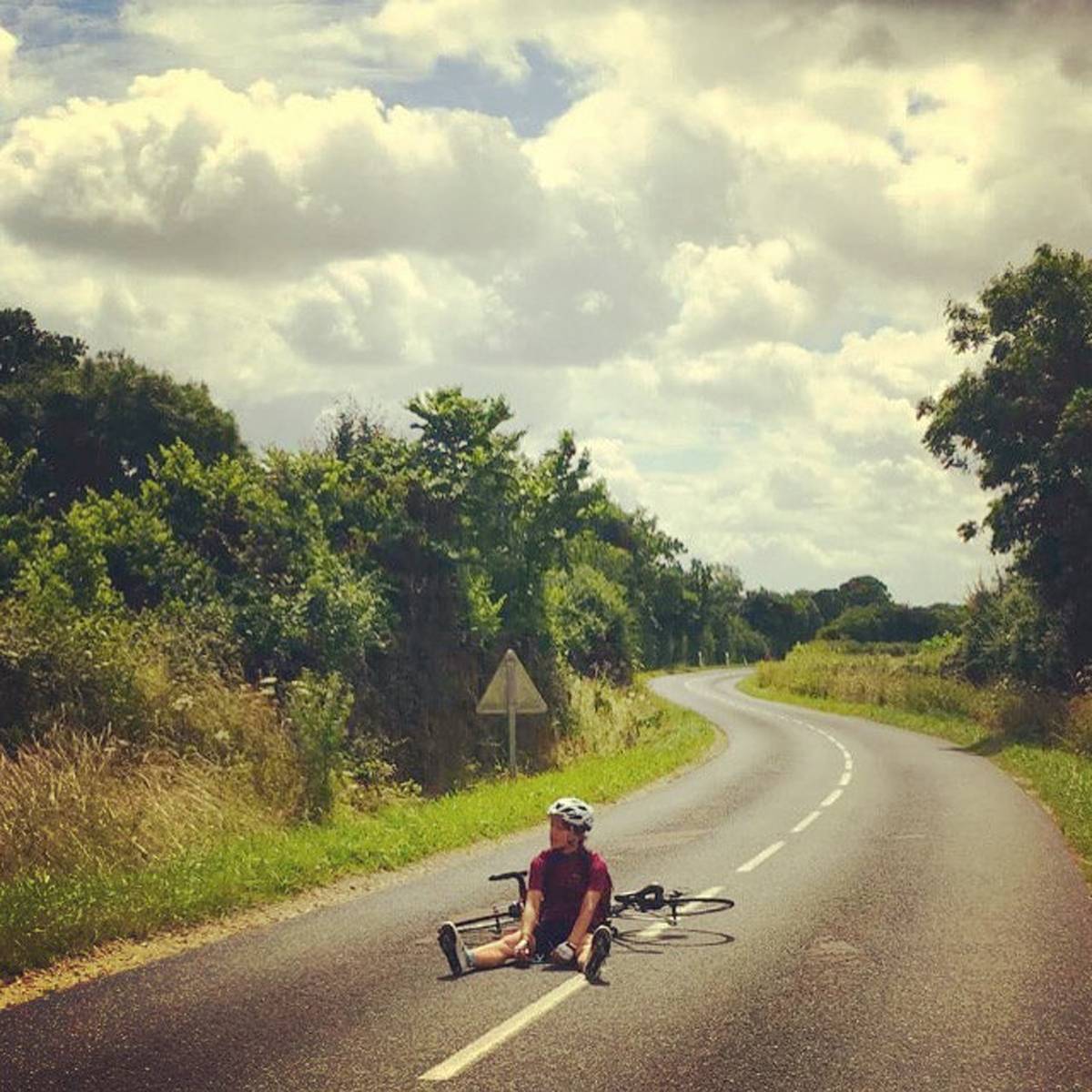 I’d never ridden a hundred miles in one go before. Sixty, seventy, eighty, even ninety, but never one hundred.

There’s something magical about the century, the achievement of ticking over from tens of miles to the elusive three figures. Spending a day on the bike – spending enough time to warrant multiple coffee stops.

And so a plan was hatched! April would be the month and the chosen day would be whenever the sun was shining. I enlisted the company of Jack, my nearest and dearest, and we planned where each of the one hundred miles would be covered.

Great gear for a long ride

We were in the middle of setting up The Severn Valley Women’s Cycling Sportive and wanted to ride the route we’d planned, so that was fifty miles we could count on straight off. Add to that the ride over from Jack’s home in the Forest of Dean and we had the century!

Soon enough the perfect day arrived, a springtime Sunday with sunshine forecast from dawn to dusk.

We set off in the cool early morning air, bottles filled with water and jersey pockets laden with emergency malt loaf. The lumpy terrain warmed us up nicely before the long and winding decent into Chepstow, eventually crossing the River Wye with Chepstow castle shrouded in morning mist. 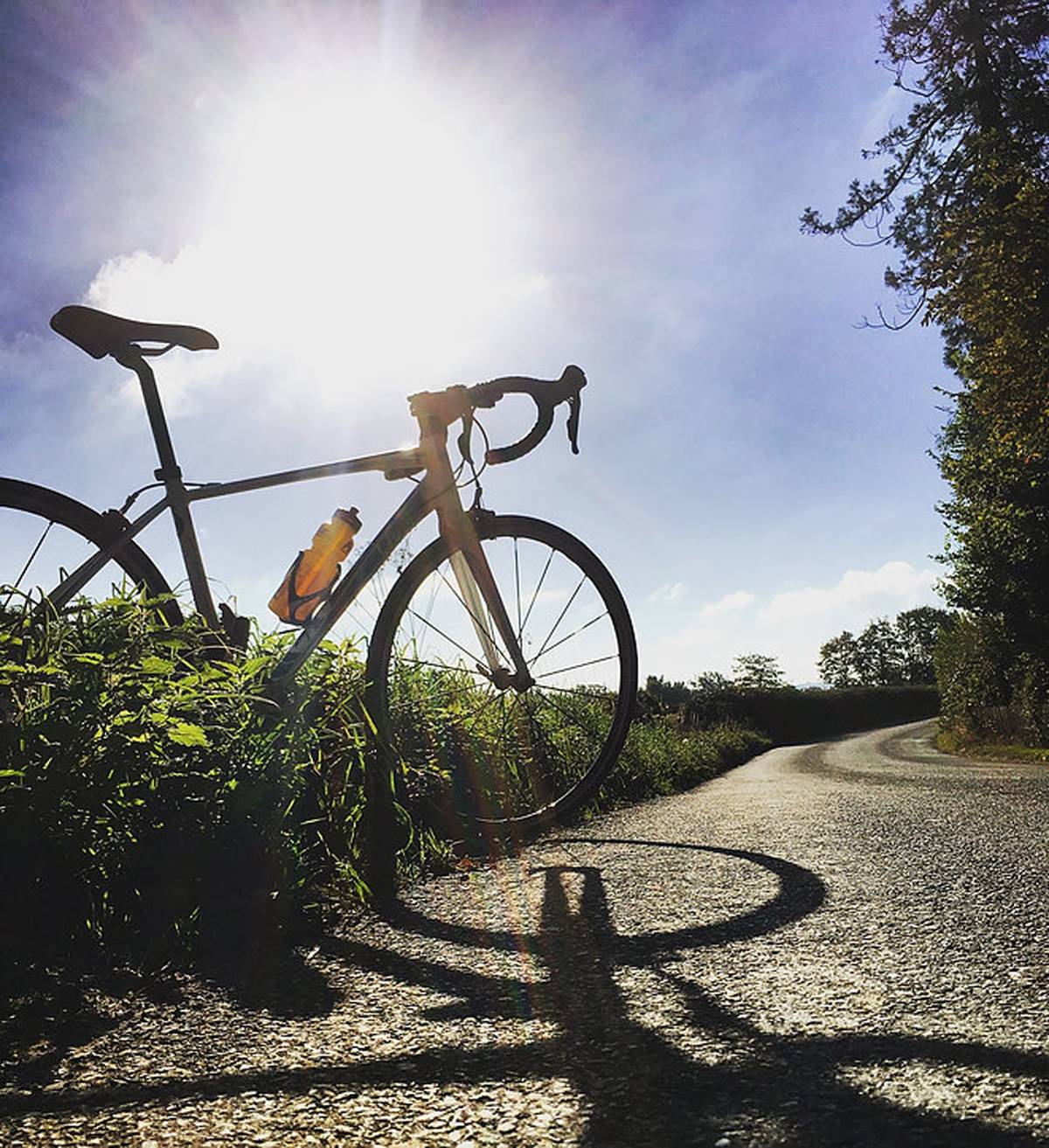 Over the bridge and far away!

We spun over the River Severn and reached the start location of our sportive, the Rugby Club at the bottom of my hometown of Thornbury. The route we planned takes you through the beautiful, quiet lanes around the Severn Valley, all the roads I’d grown up riding, but today they were a hive of activity with fellow cyclists out en masse to soak up the sunshine.

We rode past the yellow fields of oil-seed and the purple carpets of bluebells in the woods; we looked out over the River Severn to the Gloucestershire hills and the Wye Valley; we rode in the shadow of the strangely impressive Oldbury Power Station with its gloriously stripy 1960s paint job. All of this before stopping for coffee and cake at the charming Oldbury Community Café.

Refueled and re-caffeinated, we hopped back on the bikes. 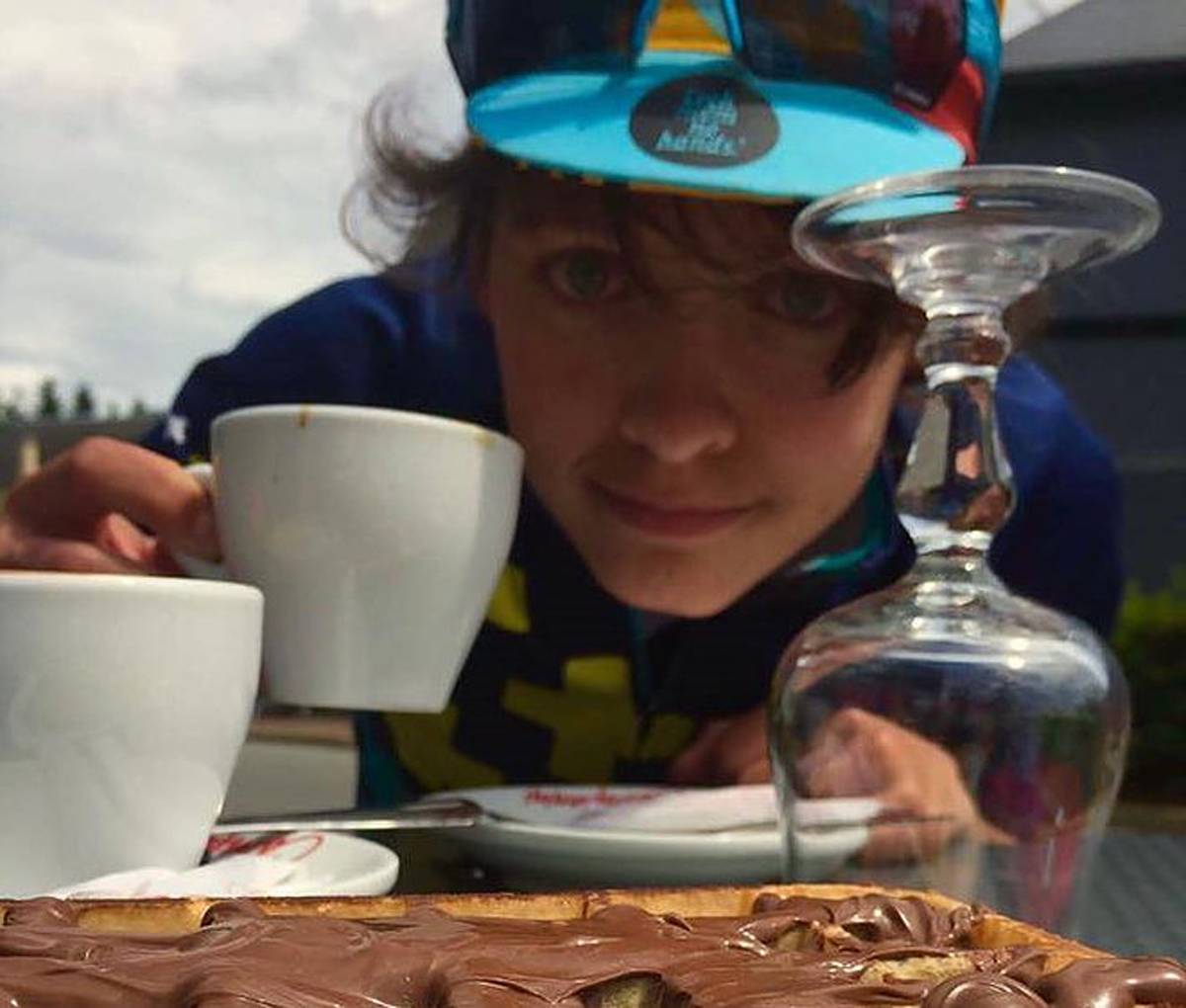 We rode the second half of the route with the wind on our banks, flying through Olveston and Tockington before reaching the only proper climb we’d plotted on the sportive route. A quiet little lane with a fairly steep section near the top.

I remember many years ago when I rode it for the first time thinking how I could see the top but was never getting any closer to it. My abiding memory though is reaching the top and glancing back to see the most spectacular view of the Severn Valley, the Severn Bridge and the countryside bursting with life behind me.

That’s what cycling is all about.

There’s no such thing as an over-cheesed toastie

We completed the route with the sun shining directly above us, natures way of saying it's lunchtime. Taking the hint we headed indoors and stopped for a cheese laden toastie, filling our boots for the journey back across the Severn Bridge and up into the hills of the Forest of Dean.

We were on roughly eighty miles by this point and, much to my surprise, I was feeling raring to go for the last leg of the century ride. It was so close I could almost reach out and touch it, just a few hills to go...

Up and down (figuratively and literally)

We were coming up the ramp towards the Severn Bridge when I suddenly felt a searing pain go down the right side of my neck.

‘Here we go’ I thought to myself; having stepped over the ninety mile mark I was firmly into unknown territory, the longest ride I’d ever done, I was waiting for something to go wrong.

We crossed the bridge and started the climb out of Chepstow, trying to keep my neck as still as possible. Jack suggested we could call it a day, we were practically at one hundred miles anyway, there was no point suffering for the sake of it.

We carried on spinning away and I said to Jack that the thought of stopping had never even crossed my mind. I was going to get my century whether I could hold my head up at the end of it or not. Jack smiled, being a multiple centurion and an ex-professional cyclist he was still as bright and breezy as the lambs bouncing around in the fields around us! 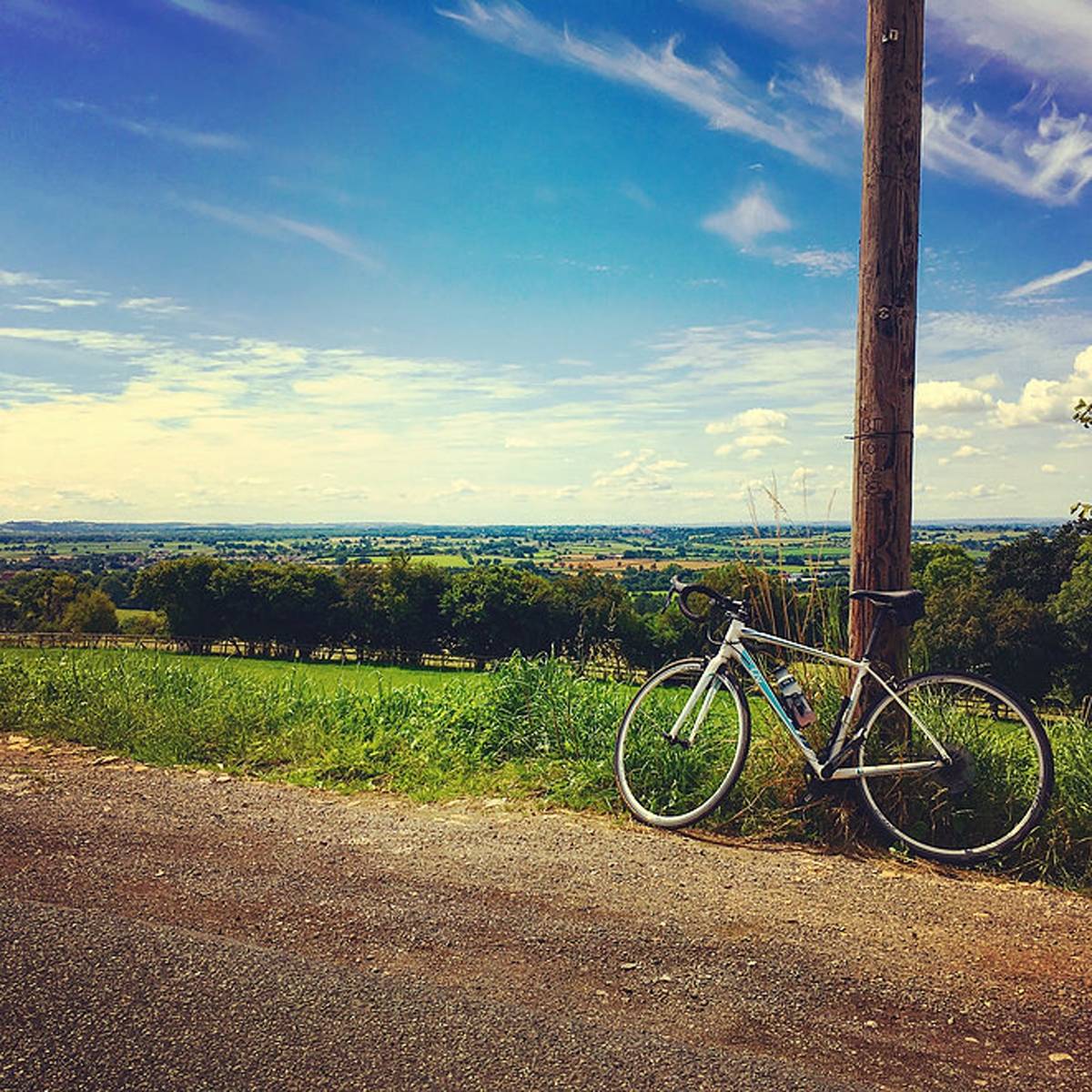 This was it, the last hill. Three miles worth of climbing and then we were home and hosed. Doing my best Chris Froome impression I fixed my eyes on the stem of my bike and dug in for the final few miles, knowing all the while that I was about to tick over into three figures of riding.

Up the twisty, windy lanes, through some speed-sapping potholes, in the shade and back into the glaring sun, turning into a headwind and swinging back round to a tailwind and finally, the top! No wait, not quite, one more turn, one more straight, then, the top!

And as we rounded the corner, within sight of Jack’s house, the Garmin ticked over to 100 miles.

That had certainly been an adventure! I'd done it, I'd conquered my first hundred miles in under six hours. That sense of achievement is a feeling that will always stick with me.

After stepping firmly into the unknown, we sat outside on the grass and enjoyed the most familiar comfort of all: a cup of tea and a packet of digestive biscuits.

This blog first appeared on Let's Go Events - look out for their women-specific events!