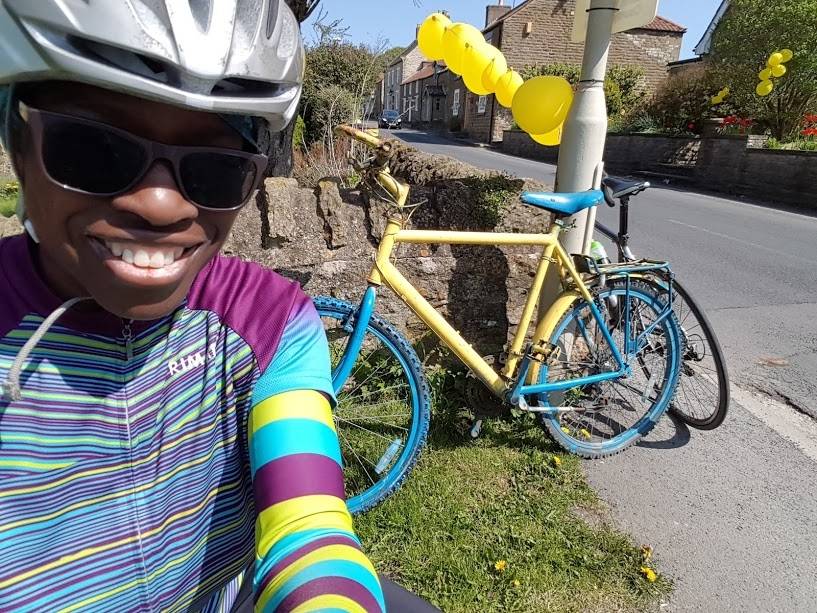 Last weekend saw many of the world’s top female racing cyclists descend on God’s Own Country, also known as Yorkshire.

This annual race, a legacy from the Tour de France Grand Départ in 2014, has become an established fixture in the women’s racing calendar.

Judging by the crowds that lined the roads, the slick organisation, the extensive television coverage, and the comparatively generous prize money offered to the racers, professional teams are keen to come to this event. 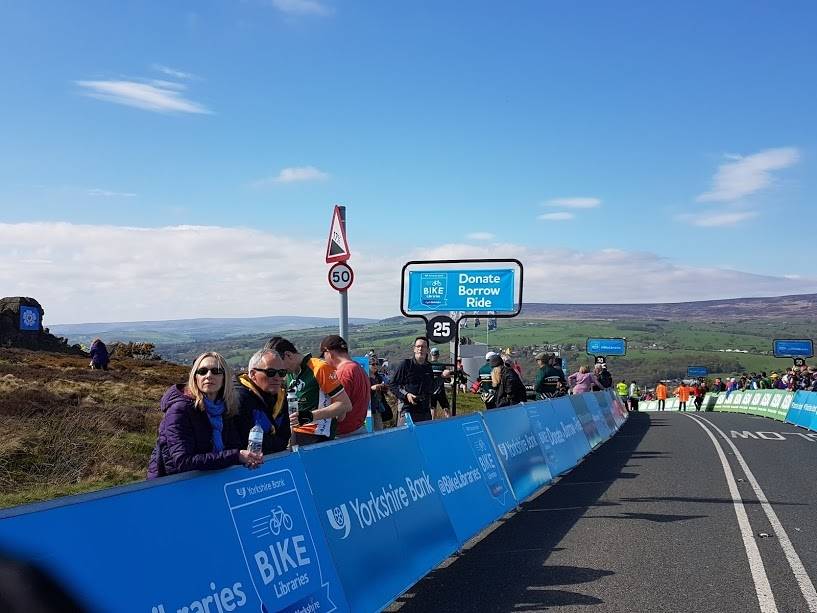 The Cow and Calf Summit

This year’s race was extended to two days, with the second stage being a summit finish – a first for the Tour de Yorkshire – on the gruelling Cow and Calf climb on Ilkley Moor.

You probably know it already, but in case you don’t know the race was won by Lizzie Deignan’s Boels Dolman’s team-mate, Megan Guarnier, while Team GB’s very own Dani Rowe (née King) finished in second place, and also won the most active rider competition.

A lot had been said about the Cow and Calf... I went there expecting a really tough challenge

UK women’s cycling could also celebrate a few other stand-out performances, notably Alice Barnes (Canyon-SRAM Racing) who sprinted to third place on stage one, Anna Christian (Trek-Drops) who won the most active rider prize on stage one, and 17-year old Pfeiffer Georgi won the Queen of the Mountains jersey on stage one.

Talking of mountains, I decided to ride parts of the route of this year’s Tour de Yorkshire, and test myself on a few hills.

Stage one was a 132-km route from Beverley, East Yorkshire to Doncaster, South Yorkshire through the Yorkshire Wolds.

The ride was described as a “flat sprint” stage. Indeed, the race ended in a bunch sprint, but it was not flat by any means! Anyone who rides in that part of Yorkshire knows that the Wolds are at best, rolling, and at worst have some sharp climbs. 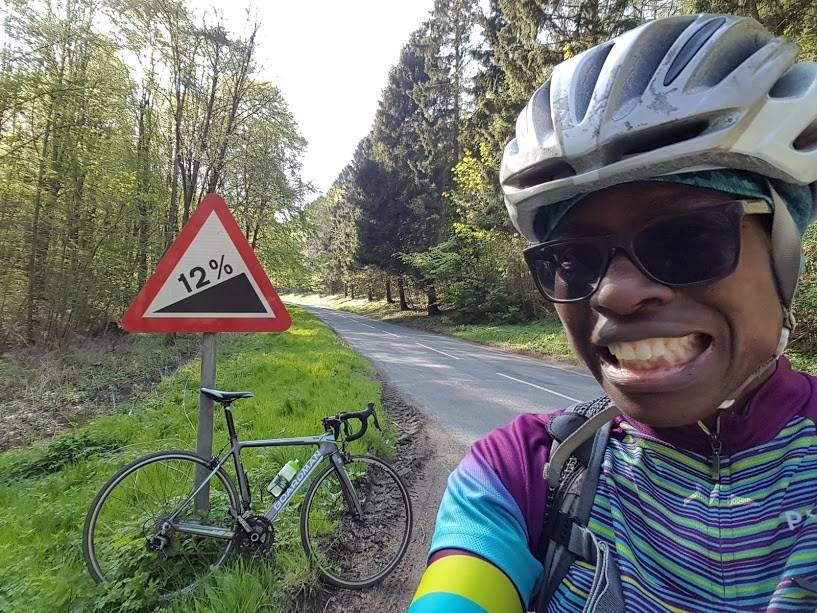 One of these big ramps was included in stage one, known as the Côte de Baggaby Hill. If you head to the pretty village of Warter, made famous by a large David Hockney painting, you pick up the road that goes west towards Pocklington.

From there the road climbs gradually before dropping down a little. You climb again and then descend quite fast as the road bends to the right. It then turns sharply to the left and the gradient gets a little steeper.

I had to get out of the saddle to do this last part, but it is doable in the saddle if your legs are well trained. Mine weren’t!

... my cadence had dropped to a slow grind, even out of the saddle!

The initial section of the climb is actually two hills known as Westbeck Hill and Inrea Hill, and according to the map Baggaby Hill is only the final sharp 12% gradient.

But I guess from now on, following its appearance in the Tour de Yorkshire, the whole section will be referred to as “Côte de Baggaby Hill”; and this is where young Pfeiffer Georgi made that final push to earn herself the Queen of the Mountains jersey on stage one.

Out of interest, I checked out Strava to see how long she took to ride the stretch. Her route was not posted on the app, but I did see the times taken by other racers on the day...

Dani Rowe, who finished fourth crested this climb in 3 mins 56 seconds, while Anna Christian who won the combativity prize took 4 minutes. This compares with my 10 minutes 20 to do the same distance.

I guess that’s why I don’t do their job!

In any case, it’s a very quaint part of the world, and once over the top there are some pleasant places to literally chill out, not least at the World Peace Café where there is a meditation centre next door. 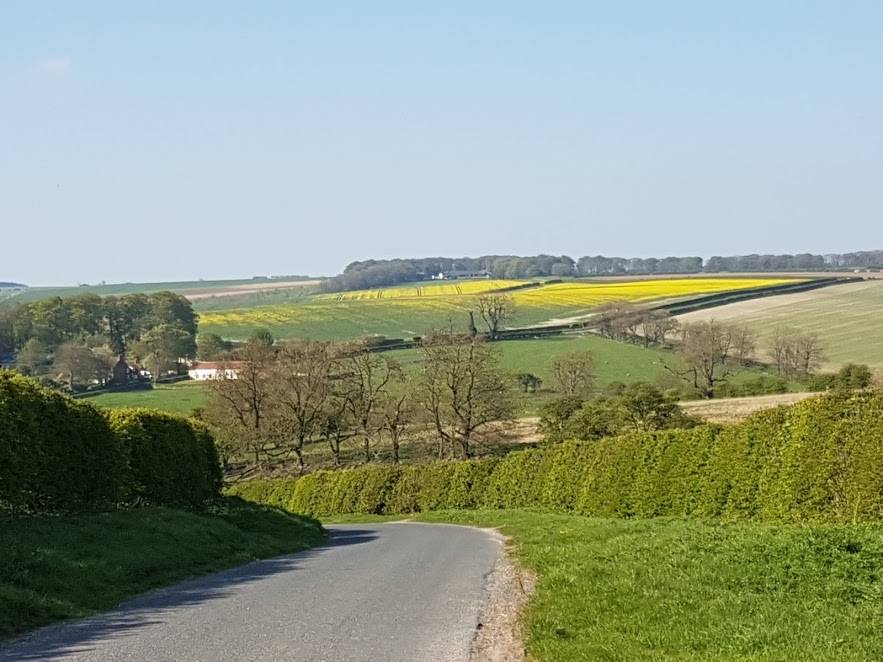 If you haven’t had your fill of hills in this area you can either turn right towards the scenic Millington Dale, or turn left to go up a brute of a climb at Nunburnholme.

So if anyone tells you that a bike ride through the Wolds will be flat, just don’t believe them!

The next part of the route I rode was the finale of stage 2, the Cow and Calf climb on the edge of the Yorkshire Dales.

I started from the valley road near Menston, outside Otley, and from there I could see the Cow and Calf rock face to my left.

It didn’t seem so far away, but in fact I had to ride all along the valley road almost past the hill, before the route turned back on itself to enter the centre of Ilkley to start the climb.

A lot had been said about the Cow and Calf that I went there expecting a really tough challenge. With that in mind, I paced myself throughout the ride. 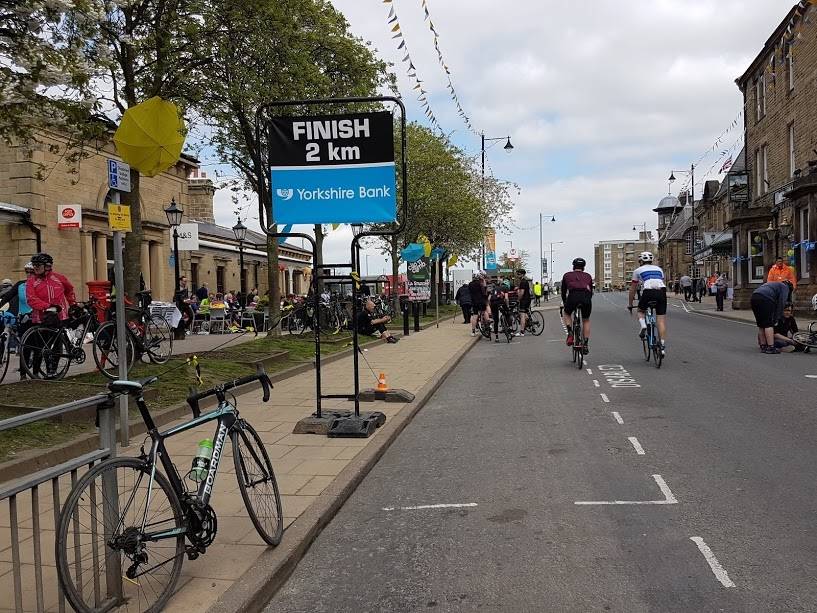 When I saw the signboard which said 2km to the finish, I was a little heartened to know that the climb wouldn’t be too long.

The gradient seemed somewhat innocuous, particularly as at this point I was still in Ilkley town centre and the hill was quite gentle.

But after the Ilkley Grammar School the road became steeper, the landscape became rural, and the hard work began.

All along the road there were keen cyclists and amateur racers testing themselves out on the Cow and Calf ahead of the elite men passing through.

Some people’s pace had slowed down to crawling pace, while others, myself included managed to maintain a cadence while in the saddle.

It was like a northern version of Box Hill, but harder!

Whatever pace people were riding, we had fantastic views around us. The rocky outcrops of the Cow and Calf looked spectacular in the afternoon sun.

In the last 500m of the climb all thoughts about admiring the scenery went out of my mind though, as the slope became harder to negotiate and rose to 17%.

I could see the finish line, but it seemed an age away as my cadence had dropped to a slow grind, even out of the saddle!

I tried not to grimace in front of the large crowd that had gathered to welcome the elite men’s race. No matter how hard a climb is I always try to look as though it’s not hurting much!

I’m not sure if I succeeded in doing that though on this day, but it was good to get lots of encouragement and clapping from the crowd – even if it wasn’t for me that they were waiting! 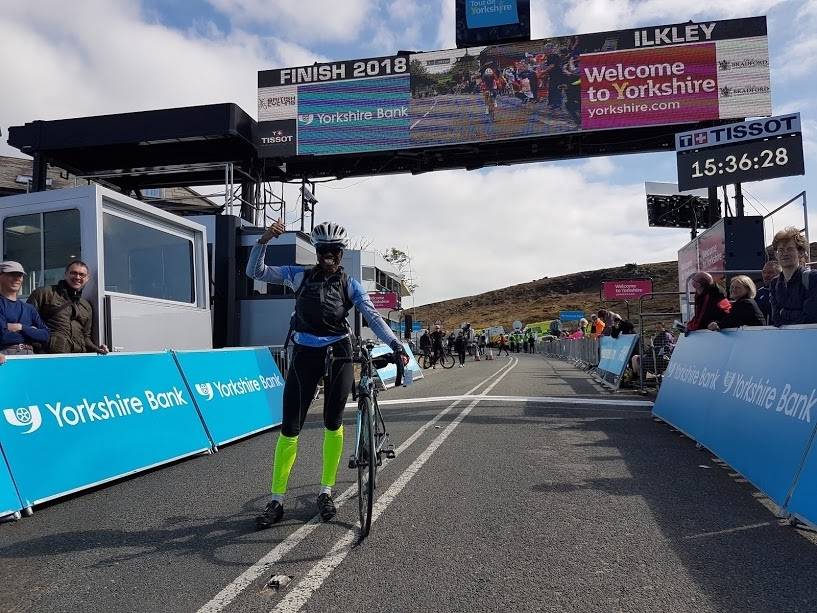 Finally, I sauntered over the finish line, feeling happy that I had bagged another iconic climb in Yorkshire.

The Cow and Calf Climb is not the steepest, or the longest climb in Yorkshire, but it’s probably one of the most deceptive.

I took over 15 minutes to ride up it, compared with Dani Rowe who flew up in 5 minutes 23, while Nikki Juniper, a very strong amateur racer took just under six minutes.

These elite racers definitely show us what a different level they are at compared with us mortals!

As the women’s race only took in the first two stages of the Tour de Yorkshire, the competitors didn’t get to contest the climbs of stages 3 and 4, which included other famous hills, such as Park Rash, Greenhow Hill, and Sutton Bank. 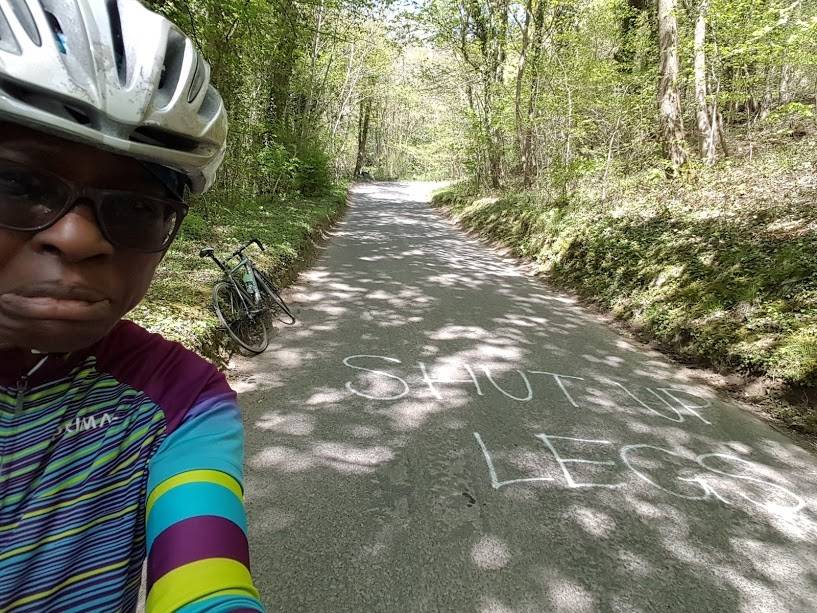 Maria 'enjoying' the prospect of the Cote de Silpho

One hill I did ride up was the Cote de Silpho in the North York Moors, which was included in stage 3 to Scarborough.

This was a very small road that was hardly noticeable on the route map, very much a hidden corner nestled in woodland. Riding up this was like going up a mini alpine climb, as it contained several switchbacks, known locally as “the windings”.

It was like a northern version of Box Hill, but harder! Once in the hamlet of Silpho my work was done and I was rewarded with a massive descent to the sea front at Scarborough, where I enjoyed fish and chips and ice cream. 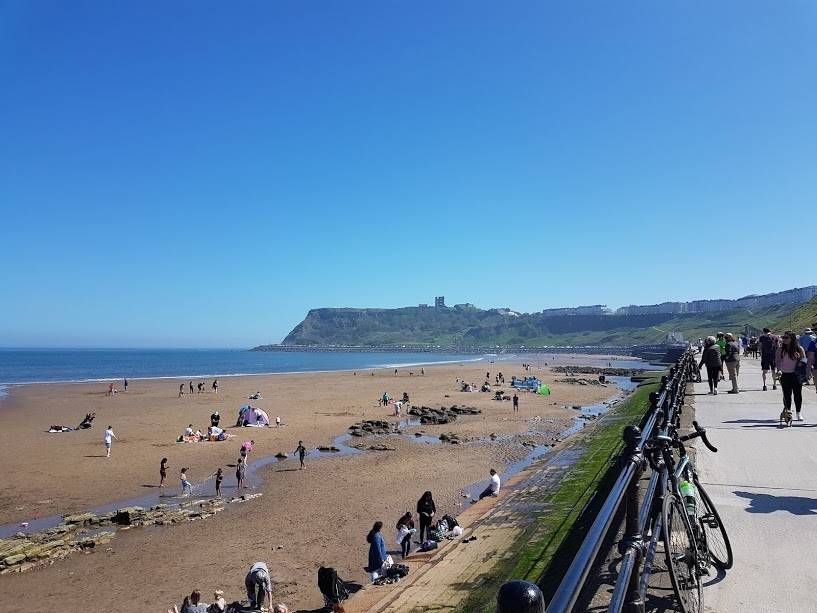 Riding in Yorkshire gives a lot of variety, but most of all it offers beauty.

And of course hills.